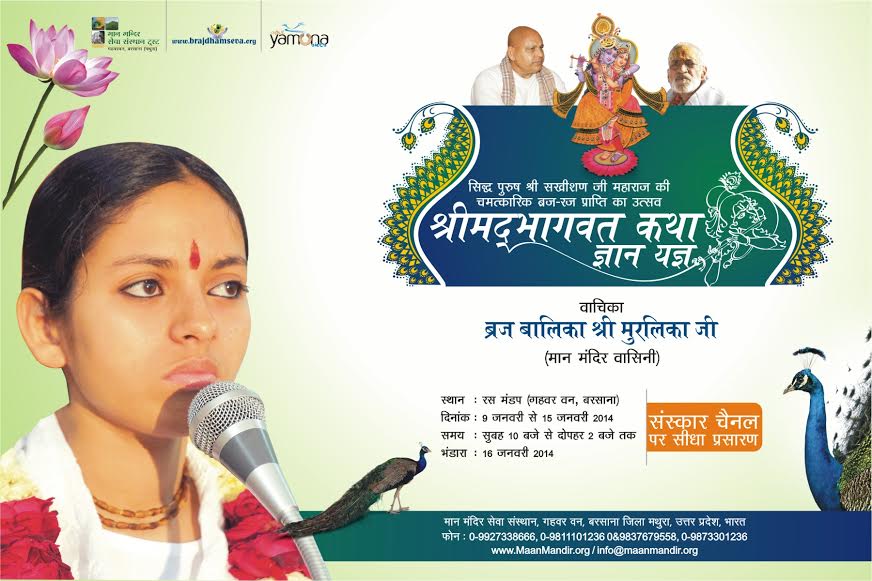 The Katha saptah is organized in celebration of miraculous Nitya Leela Pravesh of Siddha Sant Shri Sakhi Sharan Ji Maharaj.  You can read here about his miraculous entry to Nitya Leela of Braj. Sakhi Sharan Ji Maharaj used to spend a lot of time in Radha Ras Mandir and Braj Baalika Shri Murlika Sharma and Shriji Sharma used to play in his lap. Both the girls used to play with him since their childhood.

During the last days of his life, which were during the Radha Rani Braj Yatra 2013, Murlika Ji used to leave the yatra and would spend time with him  when he was very sick. She was very close to him and she had great respect and reverence for him as a great devotee.

Keeping that in mind, Shri Baba Maharaj Ji wanted her to do Shrimad Bhagwat Katha to celebrate his Nitya Leela Pravesh. The katha will be organized at Ras Mandap. Brajwasis from nearby villages have been invited to join it.

Shri Baba Maharaj Ji said that this katha will be very unique in the sense that it is being organized for Sidhha Braj Nisht Sant Shri Sakhi Sharan Ji Maharaj, it is being delivered by Nishkaam Braj Baalika Maan Mandir Vasini Shri Murlika Ji and it is taking place in the heart of Braj – Gahvarvan. It is a great opportunity to benefit from Bhagwat Katha Saptah.