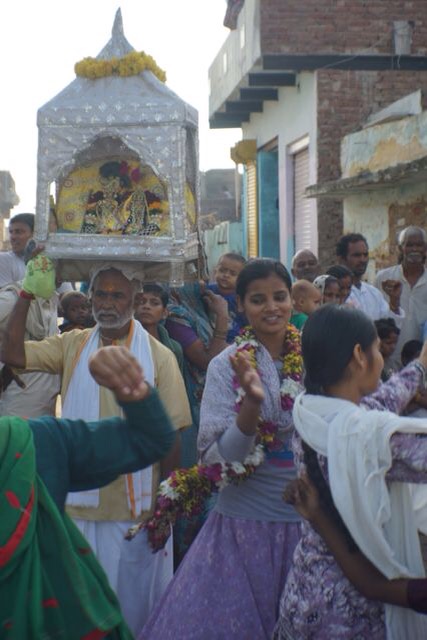 At 500am, at Maan Mandir, located on one of the well known four heads of Brahmā, Brahmācal Mountain. This place is famous as a rasa-stali of Lord Śrī Kṛṣṇa and most notably the Maan lila of Rādhārāṇī, Who enhances Krsna’s love for Her through jealous anger in love. The presiding deities here are Śrī Śrī Rādhā Maan Bhihari Lal, Who are the presiding deities on the Rādhārāṇī Braja Yatra.

The 220 strong small sannyasi children led the part to Śrīji Mandir then walked along the ridge with a beautiful dark view of Barṣāṇā on both sides, first coming to Raja Mandir or Jaipur Mandir.

This temple is most beautiful with high walls and Vedic architecture and was built by the King Jai Singh.

Between Śrīji and Jaipur temple there is the manifest place of present deities. Further ahead on Dhan Gadh is the temple of Śrīji. Rādhārāṇī manifested from the ground there and on the parikrama marg a small square cage protects that spot, and is circumambulated by the visiting pilgrims.

In the courtyard, waiting for the deity curtains to open, various kirtaneers sang heart-warming bhajans and in various areas of the seated yatris the dancing continued. Quite a sight to see the more enthusiastic dancers pull others from the ground to join in. An increase in numbers is what creates a more festive atmosphere, a ‘presence in transcedence’.

All the yonis and yonas, boys and girsl stood to the back of Śrīji Ji Mandir during the mangalarotik ceremony of Sri Ji and Thakurji, very well behaved wearing cleaning yellow and saffron uniforms respectively.

Then down the step towards Pili Pokhar which is in Barṣāṇā, and is also called Priya-kuṇḍa. According to the Bhakti Ratnakar Śrīji used to pick fruits and flowers from the pilu tree.

This is called Priya-kuṇḍa also due to rinsing the yellow hands of marriage with Nandanandan. It is called Pili Pokhar, and place where bath-turmeric of Mistressji created a golden exotic color in the water, called ‘Piri ki’.

When Nandalal comes for playing holi from Nandagram, He rests here and later tightens His turban. Ahead He is welcomed in a place called Munhmidi(chandan on cheeks). This occasion is celebrated every year. In many Purāṇas this lila is told. Many people ask whether the marriage of Rādhā and Kṛṣṇa took place or not.

There is a confirmation in the Bhāgavata. There the word ‘wife’ is mentioned 3 times in context to Rādhārāṇī. This is in the 30th chapter in the 26th, 32nd,and 39th slokas.

In the Brahma Vaivarta Purāṇa and Garga Samhita as well as other Purāṇas, the description of Rādhā and Kṛṣṇa’s marriage has been given.

In this Sarovar(lake) Nandalal arranges to come here and take a dip. (83 kelimal)

Śrīji is going to take bath in Vṛṣabhānu Sarovar. And from other side Nandalal comes. Only Śrīji can take bath in her Father’s lake. Nandalal understood that She is a daughter of Vṛṣabhānuji, but stillHe asks the sakhīs, “Whose daughter is She? What is Her name? She is coming with such pomp and grace.”

Lalitaji came foreword to listen to these words and ordered;

“Only mad people live In Nandagram. Go back to your village. This is the home of Swaminiji! You are mad! Go back!”

“She speaks very rudely. Now what should I reply? She gave a very rude answer to only one question. I dare not make another inquiry.”

All the sakhīs then again start to play.

Now see the mercy and love of Rādhārāṇī. She felt that they acted unjustly to Śyāmasundar. He was simply asking whose daughter is She? And they gave an answer to ‘go back to Your mad village’. So it is not right. When they all started to play She said;

“You play and I will bathe over there.”

Śrīji went separately, in order that Śyāmasundar could get a chance to meet Her on the other side.

She thought “These sakhīs are rude.” Then Thakur got His answer.

Śrīji is so lovely and kind, as She dipped in the water of Jalkrida, Śyāmasundar then embraced Her when She was into the water. She was shocked. It is avery beautiful lila.

The biggest festival of Pili Pokhar is when the people of Nandagram come to play holi on Rangili. First they stop there in the kuṇḍa. When Nandalal of Nandagram comes to play holi, first He tightens His turban, and carries His shield for protection, as people welcome Him.

Here at Pili Pokhar Nāradaji came to see the child lila of lali Rādhikā. Here Nāradaji gave pleasure to Śrīji and Her sakhīs by playing his vina. He begged alms and did a parikrama of all of Them. Śrī Rādhikā, a most benevolent child, gave many sweets, which She had in Her hands. Due to Her compassion he rolled on
experiencing such a bhava in achieving such dust. Child Śrīji ran away from there with all the female children just like agroup of deer running together, on their way home.

Padrivan: Shriji flower puṣpas for Sanjhi lila(daily made wall caricatures in dung) which is worshipped daily for 15 days.

Bhanukhar: Vṛṣabhānu took his snana there at the time of the wedding ceremony.

Maheswari Sar: Siva wanted to become a gopi so Parvati dressed him up as a gopis, and because he was in a male form, dressed as a woman, she made mimicking expressions making fun of him, thinking that he looked so funny.

The next day we are off to Nandagaon.