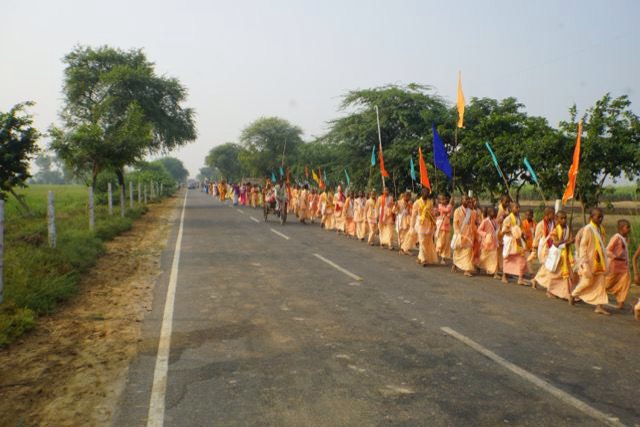 Then to the left off the main road was Gulab Sakhī’s Chobutra(a raised platform) which is his samādhi. Gulab Sakhī was a Muslim and a great devotee of Rādhārāṇī. Once he was sitting beneath the tree on the backside of the temple and he was asked by the pūjārī, “What are you doing here?”

Gulabji said, “I have the seva of offering pan to Thakurani.” Then the pūjārī said. “What is the proof?” Gulabji opened his hand and said, “Well here is the pan that you just offered to Shriji.” The pūjārī was astounded and could understand that this devotee is very dear to Mahārāṇī.

Next we came to Prema Sarorava. This lake manifested from the tears of Śrīji in her complete mahā bhāva relation with the Lord. This is such a beautiful kuṇḍa with many steps where the pilgrims can take darshan and snāna.

Here Thakurji was placed on a table and bhoga was offered. Nṛsiṁha Baba led another rasiya kirtan.

Sanket Vāna, came after this. Sanket refers to signs, through various hidden indications the divine couple would come and rendezvous here. This place was the field of their early loving exchanges.

One time Kṛṣṇa said, “Oh you are a very beautiful girl, where are you from? Where is your father and mother? I have never seen you before? I none other than am Nanda-nandana.” Rādhārāṇī asked, “Are you the same One who is always stealing the butter?”

Then Kṛṣṇa becomes embarrassed and felt that on the first meeting this was not an impressive start. He replied, “What it may be , but don’t worry I will not seal any thing from you. Why don’t you just play with Me?” Surya wrote this conversation in his poetry.

Here Sanket Bihari, the presiding deity has returned just a few days ago after being abducted one year ago. Such a beautifully carved Lord, has been made from such a fine hard stone that is impossible to be in these modern times.

Then we arrived at Uddhava Kyari, where Uddhava met with the gopīs, he was sent by Kṛṣṇa to give a message and here he witnessed the exalted stature of their love for Kṛṣṇa. Uddhava was a great jñāni pandit, a disciple of Bṛhaspati, the guru of the demigods, however before the gopīs he felt ever so unqualified in his relation with the Lord. Here he spoke the Gopī-gītā.

He told the gopīs, “Kṛṣṇa is the Supreme soul and your are the part an parcel souls, so there can no be any separation between you and the Lord. You just meditate on Him and you will feel His presence.”

But the gopīs replied, “You say meditate on Him but we are trying to pull Him out from our minds!” They are always remembering Him because they do not have anything else but Him.

The long line of pilgrims could easily see Nandagram manifesting in the distance, a mount which has the main white temple on top.

Nandagram is the Home of Śrī Kṛṣṇa.

Kṛṣṇa would cow graze His cows here and have pastimes with His cowherd boy friends.

Many pastimes are there. The mountain of Nandagram is known as Nandīśvara, the head of Lord Śiva. One time Śaṅkara came to take darshan and he was wearing matted locks, skulls, and snakes on his body. Yaśodā Mayi was thinking that if my little Boy saw this form then He would become afraid. So she told to Lord Śiva, “Your dress and ornaments are quite extraordinary and my son will become afraid.”

Śiva was saddened and stayed at a distance came here and sat here and hoped that one day he could get the darshan of the Lord. Asheshvara(one who sits with hope) Mahadeva and began to play his damaru(a percussion instruement with a ball).

Kṛṣṇa knew he was there playing, then He started to cry. Then Yaśodā Ma spoke with the other gopīs and was thinking “Oh why my Lala is crying?” They asked her, “Did someone come and did you sent that person away, maybe he has done some black magic?” Then Yaśodā goes, “Oh one Bābā came to see Kṛṣṇa and I did not allow him to enter. When he left and my Lala began to cry.”

Then the gopīs said, “Oh then you call that Bābā quickly, he is the reason behind this crying,” Mother Yaśodā said, “Jau jau, go get him!”

They looked for him, and found Śiva with his eyes closed in meditation on Krsna. The gopīs asked Mahadeva, “Hey sādhu are you sleeping? Mother wants you to come and solve a problem with Krsna. Śiva said, “What does she want of me, she has already told me to go away.” The gopīs replied, “Don’t worry just come.”

When he arrived Yaśodā explained the condition of the child, and Lord Śiva said “I am expert in the healing arts.” When Kṛṣṇa saw Śiva, He became silent. Then both Lords were satisfied Lord Śiva with mantras and put some ashes in His navel and asked the gopīs to lift the child and place the lotus feet of the Lord on his head. Yaśodā then begged Lord Śiva to always reside in Nandagram. Lord Śiva’s prayers had been answered.

This is the pastime behind Lord Śiva taking the form of Nandisvara Mountain in Nandagram.

We walked by the pandal setup to Ter Kadamba.

After cow grazing, Kṛṣṇa climbed the Kadamba tree and called the cows to return to their home. Here Kṛṣṇa and Balarāma would play with the sakhās, cowherd boys.

Also this place is where Rūpa Goswami’s bhajan-stali(place). He would perform His bhajan here.

Once When Sanātana came to meet Rūpa and they were engaged in Hari katha, and Rūpa was meanwhile thinking, my elder brother is an elevated Vaiṣṇava how can I serve him?

There was nothing to give him. He used to go on madhukārī, and had no possesions, and one time a beautiful little girl came with some milk products and rice, and said, “You make some kheer(sweet rice) with this, My mother sent this to you. You may be busy in sādhanas and discussion, so I can prepare this offering,” and then She started to cook and completed it. “You can now offer to your Thakur, I am going.” and left.

When Rūpa offered to this prasadam to his brother, Sanātana, after tasting experienced an ashtasattvic bhava(ecstatic mood).

The Sanātana asked, “Where did you get this prasādam?” Rūpa replied what had happened and then Sanātanaa said, “Not an ordinary being can make such a preparation.” Rūpa told him, “I was thinking how to give you some gift and then this girl just came to me.” Rūpa described what She looked like and Sanātana, “Oh Rādhārāṇī has come Herself and served us. We have given some difficulty to Her, we should be careful our of desires.”

In the pandal program Bābā Sri mentions how Śrī Rādhārāṇī is much more merciful than Krsna. The milk goods supplied to Madhavendra Puri by Krsna cannot compare to the opulent kheer supplied to Rūpa by Śrīmatī Rādhikā.

As we have unlimited material desires, it is very difficult for us to understand this elevated mood of Sanātana, to never inconvenience the Supreme. Of course in this situation, is the nature of the Lord; the satisfaction in serving the selfless devotee.