On the Pasopa dharna, the agitating rural women tied a protective thread to Lord Badrinath 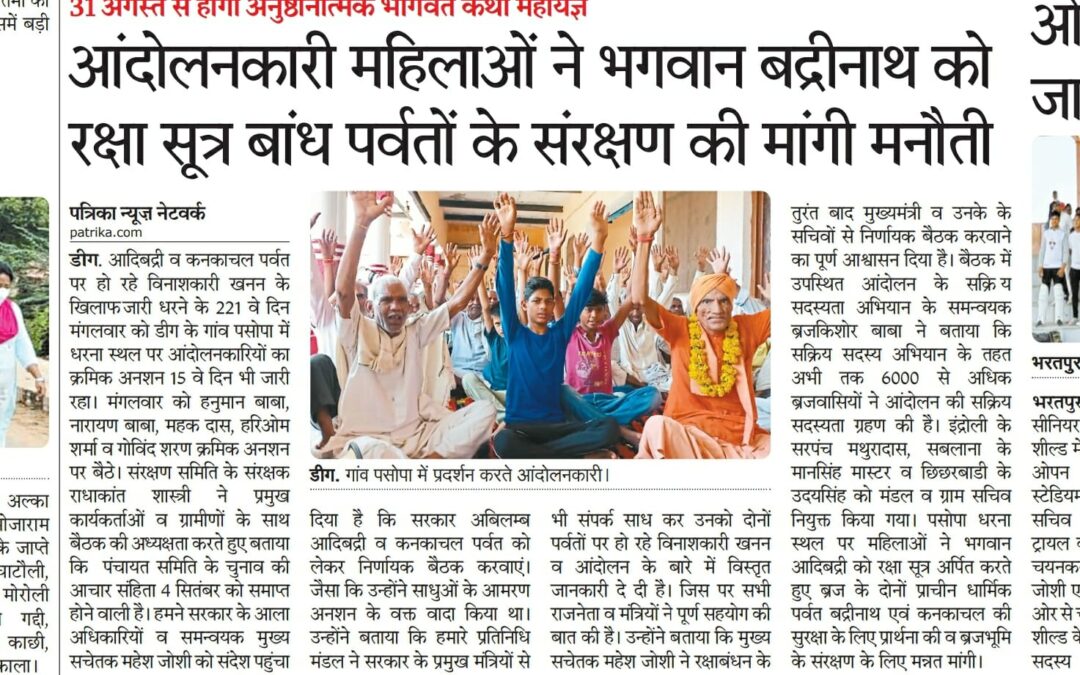 On the Pasopa dharna, the agitating rural women tied a protective thread to Lord Badrinath and sought protection of both the mountains.

Chief Whip should be called soon, otherwise the agitators will be free to take adverse decisions – Mahant Shivram Das

Today, on the 221st day of the ongoing strike against the destructive mining taking place on Adibadri and Kanakachal hills, the gradual fasting of the agitators at the site of the strike continued for the 15th day as well. Today Hanuman Baba, Narayan Baba, Mehak Das, Hari Om Sharma and Govind Sharan sat on a gradual fast. On the other hand, today the patron of the protection committee, Radhakant Shastri, presiding over an important meeting of the villagers, said that the code of conduct for the election of the present Panchayat Samiti is going to end on September 4, we have sent a message to the government officials and coordinator, Chief Whip Mahesh Joshi. It has been conveyed that immediately the government should hold a decisive meeting regarding our Adibadri and Kankachal hills, as they had promised during the fast unto death of the sadhus. He told that our delegation has also contacted the chief minister of the government and given them detailed information about the destructive mining and agitation taking place on both the hills and all the politicians and ministers talked about full cooperation.

Those who were contacted are mainly senior ministers BD Kalla, Lalchand Kataria, MLA Rafiq Khan, MLA Wajid Ali, MLA Joginder Singh Awana. He also informed that Chief Whip Mahesh Joshi has given full assurance to hold a decisive meeting with the Chief Minister and his secretaries immediately after Raksha Bandhan. Brajkishore Baba, the coordinator of the active membership campaign of the movement present in the meeting, said that under the active member campaign, more than 6000 Brajwasis have been taken active membership of the movement so far. Everyone has taken an oath to make every possible contribution in the protection of both the hills of Braj as well as in the development and promotion of Braj land. He informed that today more than 400 active members were made in Chichhar Bari, Sablana and Indoli villages and Mathuradas Sarpanch of Indoli, Mansingh Master of Sablana and Udai Singh of Chhichhar Badi were appointed as Mandal and Village Secretaries.