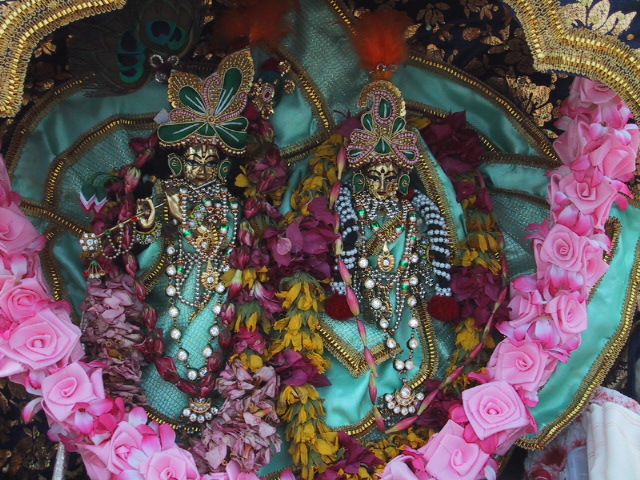 A materialistic so-called guru instructs his materialistic disciples about economic development and sense gratification, and because of such instructions the foolish disciples continue in the materialistic existence of ignorance. But Your Lordship gives knowledge that is eternal, and the intelligent person receiving such knowledge is quickly situated in his original constitutional position.

If a materialistic person becomes a spiritual master, he gives false intelligence to his disciple. The great loss in this is that the disciple continues in darkness even after initiation. It is a very dense darkness, which is very hard to come out of.

Therefore in such a situation, one should turn to the Lord as his spiritual master: “O my Lord, you please give me transcendental knowledge.”

Previously when I have quoted this sloka, some people have challenged: “Does this mean you oppose initiation?”

“No I don’t oppose it. I am simply repeating the spoken word of King Satyavrata to the Lord in the Śrīmad Bhāgavatam. You are feeling uncomfortable by this verse, your mind having been influenced by narrow-minded people. Don’t you accept the version of Śrīmad Bhāgavatam, which is spoken before the Lord Himself?

I am not denying initiation, but what often happens is that people become narrow-minded easily.”

The living entity, that has any trace of false ego or selfishness, cannot be the real well-wisher of others. Each mother wants the son to obey her. Each wife wants the husband to follow her. And because of this she may even separate the husband from his parents. Such is the sense of proprietorship in this world.

Such is the nature of this world. This is the entanglement of ‘me’ and ‘mine.’ The same problem is found in the society of sādhus, devotees, scholars and political leaders. The problem pervades everywhere.

There is a case where the husband’s teatime was 8 o’clock and the wife’s was at 7 o’clock. Based on this difference there was divorce. In each house there is quarrel because of this ‘me’ and ‘mine’ principle.

Quarrels between spiritual master and disciple are also found in some situations because of this ‘I’ and ‘mine’ attitude. There are also quarrels because of attachment to a particular sampradāya or the post like being a temple president or GBC.

“You have violated my order; get out from here! You are ousted from our sampradaya!” What is this? It is quarrel based on ‘I’ and ‘mine’ and nothing else.

When one walks on the grass, placing one’s foot upon it, the grass doesn’t complain asking, “Why are you crushing me?” After the grass has been trampled upon, after some time it stands back up again. It does not take revenge.

One in the bodily conception, will run away upon being threatened. If one is not, then one will not run away. Even if an atomic bomb would fall, a real devotee would not fear. Just like Prahlāda Mahārāja. So much danger and torture was inflicted upon him, but he was not perturbed:

Hiranyakasipu could not kill his son by throwing him beneath the feet of big elephants, throwing him among huge, fearful snakes, employing destructive spells, hurling him from the top of a hill, conjuring up illusory tricks, administering poison, starving him, exposing him to severe cold, winds, fire and water, or throwing heavy stones to crush him. When Hiraṇyakaśipu
found that he could not in any way harm Prahlada, who was completely sinless, he was in great anxiety about what to do next.

The elephants were gigantic like big mountains. After conquering the four directions they were captured by Hiraṇyakaśipu and employed to try and crush Prahlāda. Prahlāda was bound up and put infront of these gigantic elephants.

Huge pythons and poisonous snakes were set upon Prahlāda Mahārāja. When I first came here to Braja sixty years ago, I was told about one instance in Maanpur (a village just below Maan Mandir). I used to walk there on the front-side of the mountain and as I was once climbing, one cow herder told me about this one snake.

He said: “There is one snake…Ooh…he binds the four legs of cows so they can’t move and then drinks milk from the cow’s udder.”

If one snake in Vraja can bind the legs of a cow to drink the milk, we cannot imagine the great pythons, which were called by Hiraṇyakaśipu to kill Prahlāda; but they became powerless.
Abhichara means the process of chanting a specific mantra directed at killing someone. As Durvāsāji created kritya(a demoness) similarly abhichara was used to try and kill Prahlada but it was ineffective.

Prahlāda was thrown from the top of mountains, which were thousands of feet high, but he was not killed. Śambarasura used many types of illusory weapons upon Prahlāda. He was closed in a cave in which there was no air to breath. He was given kalkuta(most deadly) poison but nothing happened. For months he was not given food, but nothing happened.

I heard how in Spain there was war between the Spanish and English. The dictator was arrested and put onto ice where there was so much suffering, so he was forced to disclose the facts. Similarly, Prahlāda was put in snow, and they tried to burn him in a blazing fire. Hiranyakaśipu ordered, “Put this boy in the fire.”

They tried to drown him in the ocean and grind him using mountains, but no-one could kill him. There are similar verses in the Viṣṇu Purāṇa, as we gave here in SB 7.5.43-44. There Prahlāda tells his father, “You cannot kill me because I am sinless.”

What is the greatest sin? We have to understand this. Each verse of the Rāmāyaṇa is a mantra. Some people criticize me for not being ‘rasika’ because I speak verses of the Rāmāyaṇa “which have nothing to do with rāsa.” But I know that if one sees fault in others, it makes one devoid of Śrī, fortune. With this mentality you cannot attain any rasa, you can only falsely advertise yourself. As long as there are unwanted things within the heart, you cannot attain the Lord and the nectar from Him.

From the ākash(sky), the Lord spoke to Nārada:

O Nārada [the Lord spoke], I regret that during this lifetime you will not be able to see Me anymore. Those who are incomplete in service and who are not completely free from all material taints can hardly see Me.

As long as there is any lust greed or anger in the heart it is not possible to attain the Lord. One who abandons all faults such as criticizing others is truly a rasika:

“But you tell lies, have false pride, you have anger and hate, so how can rasa come in your heart? ”

When I first came to Vraja, I possessed this attitude of narrow-mindedness. My spiritual master told me to give up this mentality. I was new in Braja and approached many saints. I went to one place where some saints were discussing about nityabihar, the conjugal love of Rādhā and Kṛṣṇa. They explained that, “There there are six types of conjugal pastimes that Rādhā and Kṛṣṇa enjoy.” This was explained to me sixty years ago.

They said. “One type of conjugal pastime is where Rādhā Kṛṣṇa perform a lila in a bed and never leave it.”

“In another type of conjugal pastime, they get down from the bed and talk to their sakhīs.”

In the same way they told me in detail of the six types of conjugal pastimes, the nityabihar(everyday loving pastimes), of Rādhā and Kṛṣṇa.

I did not like the description of Rādhā and Kṛṣṇa never leaving Their bed. I was thinking how could they make Rādhā and Kṛṣṇa like stone, inanimate where they never do anything else but just stay in their bed. I thought this was narrow-mindedness.

This narrow-mindedness is maya. This ‘me’ and ‘mine’, ‘you’ and ‘yours’ is simply maya. From Lord Brahma down to the ant, no living entity is free from this false conception of ‘mine’ and ‘yours’.

Being full of contradictions, all forms of religion but bhāgavata-dharma work under conceptions of fruitive results and distinctions of “you and I” and “yours and mine.” The followers of Śrīmad-Bhāgavatam have no such consciousness. They are all Kṛṣṇa conscious, thinking that they are Kṛṣṇa’s and Kṛṣṇa is theirs. There are other, low-class religious systems, which are contemplated for the killing of enemies or the gain of mystic power, but such religious systems, being full of passion and envy, are impure and temporary. Because they are full of envy, they are full of irreligion.

How can a religious system that produces envy of one’s self and of others be beneficial for oneself and for them? What is auspicious about following such a system? What is actually to be gained? By causing pain to one’s own self due to self-envy and by causing pain to others, one arouses Your anger and practices irreligion.

Because people are teaching narrow-minded concepts about the Lord, then as a result irreligion is increasing and society is becoming degraded.

We are destroying society by teaching narrow-mindedness.