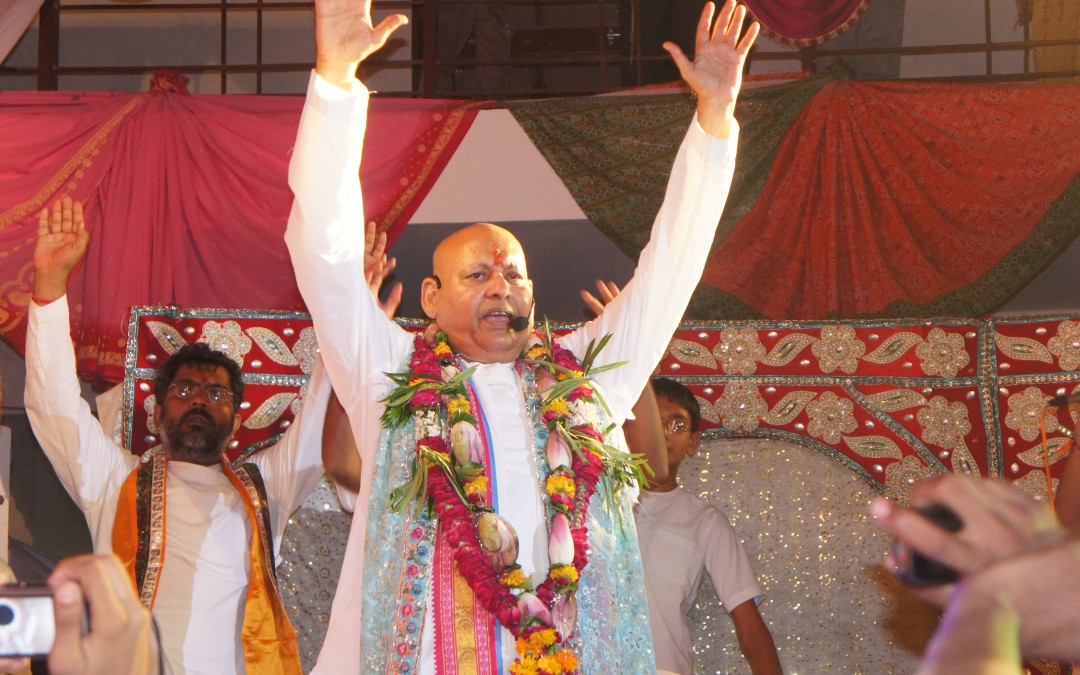 A question came in my mind. Why does narrow-mindedness come? Why does it come?

In all the Purāṇas and religious texts of the world, it is written that narrow-mindedness is maya. ‘Mine’ and ‘Yours’ consciousness is maya.

Why do people like us, who day and night study the scriptures and deliver lectures, become narrow-minded?

Even if one is an educated scholar, a religious ācārya or teacher, and gives regular lectures, why does he stay narrow-minded? It is seen that often scholars and even great well-known personalities can be very narrow-minded. Why is this?

How is narrow-mindedness born?

All the scriptures and saints say we should see God everywhere. Rāmāyaṇa describes the whole world as being a manifestation of Sītā Rāma.

Śrī Kṛṣṇa states in the Gita 7.19: Vāsudevaḥ sarvam iti sa mahātmā su-durlabhaḥ, that a great soul, mahatma, sees Vāsudeva everywhere and in everything. Krsna says that such a great person is very, very, rare in this world.

There is a measuring gauge, a thermometer, which can be taken by any sampradāya, by any scholar or religious teacher and measure whether the mercy of the Lord is actually there or not; the test of the individual is the remaining sense of false proprietorship and ownership within.

One should be freed from the bodily conception of life and free from thinking, “This is my house, this is my disciple, this is my son, this is my daughter etc.” This is the consciousness of an attached householder.

Also, by creating these false divisions one does not gain, but loses his power and influence.:

“ United we stand, divided we fall.”

If one lectures with in a party-spirited mood, he becomes weakened.

Just now a phone call came from Jaya Kṛṣṇa das who was in Mathura. He has taken advice from another great saint. Someone commented, “Don’t call other great saints, only call Bābā Mahārāj.”

I said, “What you are saying is wrong!” There has to be unity between great people. If we can show unity then everyone else will learn from this. Narrow-mindedness begins from the top. This disease starts from upwards and descends downward.

Whatever action a great man performs, common men follow. And whatever standards he sets by exemplary acts, all the world pursues.

The disease comes from above, not from below.

Just before, someone was talking about a therapy using oil; taking pure organic oil in the mouth and gargling for sometime cleanses all impurities and bacteria from the body. It is a process of treating so many diseases.

So this process of cleansing the mouth with pure oils is called, ‘Ancient Indian Oil Therapy.’

The disease starts in the mouth, and then spreads throughout the entire body. If the mouth is properly cleansed, then the stomach will be clean. And if the stomach is clean then there cannot be any disease.

If people approach me and they have a bad smell coming from their mouth, I tell them to clean their mouth with salt, then the bacteria causing the smell will be destroyed. Otherwise those bacteria will go to the stomach and cause harm. Due to laziness, people do nothing about it. But if salt if used on the teeth, diseases will be reduced

So the disease starts at the top of the body, in the mouth. Similarly, if the spiritual master is narrow-minded, then the disciple will also be narrow-minded.

A great saint writes; “If the spiritual master is a beggar, the disciple will also be poor.

Children of poor people come and collect plastic bags from the garbage to try and get some money for the polyurethane.

Disease starts from the top.

Therefore it is wrong that other great saints not be called and respected. Call them, respect them and end all dissention and disagreement.

If we fear that by doing so our prestige and greatness will be taken away, that is wrong. To try and protect one’s false ego is incorrect. That means we haven’t really attained the mercy of the Lord.

What is this body? It is only the food for dogs and jackals. If a dead body is thrown then dogs and jackals will eat it. If not cremated, it gets eaten by these animals.

To have a false conception of I and mine based around this body, which is simply the food for dogs and jackals’, is maya.

One who has overcome this mentality of ‘I and mine’ has attained the mercy of the Lord.

In the beginning of Adi Śaṅkara’s very clear commentary on Brahma sutra it states:

The way to measure whether someone has really attained the mercy of the Lord is how free he has become from the bodily conception of life. This is the measure; this is the gauge to see. Regardless of how much one may be chanting or reading the scripture, this is the ultimate measure of how much one has received the Lord’s mercy.

But anyone who is specifically favoured by the Supreme Lord, the Personality of Godhead, due to unalloyed surrender unto the service of the Lord, can overcome the insurmountable ocean of illusion and can understand the Lord. But those who are attached to this body, which is meant to be eaten at the end by dogs and jackals, cannot do so.

All the living entities of this world are dying in this false conception of being a big scholar, mother father, son, daughter, wife, husband etc. Therefore people’s advancement in real religion, dharma is checked. The dharma of being a chaste woman, ideal parent, husband etc., are all ultimately useless.

This verse in Śrīmad Bhāgavatam 2.7.42 is the statement of Lord Brahmā. The prominent speaker in the Bhāgavat is Brahmāji. And the prominent listener is also Brahmāji. We can understand this based on the first śloka of Śrīmad Bhāgavatam; tene brahma hṛdā ya ādi-kavaye. It is stated here that the Lord first imparted this knowledge into the heart of Brahmāji. Ādikavi means Brahmā. Muhyanti yat sūrayaḥ: Even the greatest scholars are deluded. It is the same in present society.

Madhusūdana Sarasvatī, who is described in the Bhaktamal, has given another example. He was a great scholar in the line of Adi Śaṅkarācārya and later became a great devotee.

Instead of transcendental emotion, if narrow-minded thoughts are attained, then there is no advancement, but degradation.