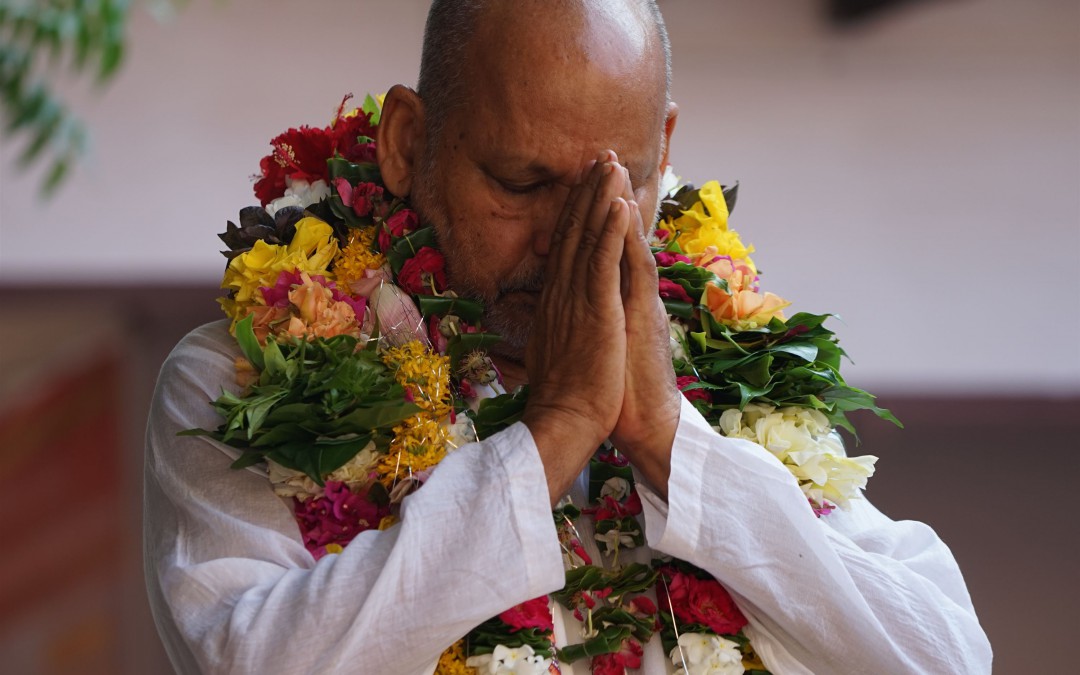 By taking shelter of the mind, the human being can consume and can have sense gratification, otherwise not. There are saints of such a great standard; their minds are fully detached, that even the desire for a sweet laddu has left their mind. That’s why 56 kinds of dishes are useless to them. They are called paramahaṁsas, and when the youthful Śukadeva was running away, the apsarās, the girls of heaven, were naked as they took their bath. Later the father of Śukadevaji, Vyāsaji came by. He was old; and as he looked at them all the apsarās put their clothes on. Śukadevaji had worn no clothes, Vyāsaji was quite astonished and he asked, “That my son Śukadevaji is a young man and I am old man,” this śloka comes in the Śrīmad Bhāgavatam 1.4.5:

While Śrī Vyāsadeva was following his son, beautiful young damsels who were bathing naked covered their bodies with cloth, although Śrī Vyāsadeva himself was not naked. But they had not done so when his son had passed. The sage inquired about this, and the young ladies replied that his son was purified and when looking at them made no distinction between male and female, but the sage made such distinctions.

When the heavenly apsarās could see that there was discrimination in Vyāsa’s vision that ‘this was man and this was woman,’ they said, “That in the sight of your son, ‘man and woman’, was not there. He has equal vision everywhere.” That means Śukadevaji was superior to Vyāsaji, though as son, had no discrimination but in the mind of his father there was. The son had become superior to father. The nectar of Śrī Kṛṣṇa is such, if somebody has attained the bliss of Brahmān, and can not obtain the nectar of Śrī Kṛṣṇa; then he possesses nothing. In the Śrīmad Bhāgavat it is described:

Sūta Gosvāmī said: All different varieties of ātmārāmas [those who take pleasure in ātmā, or spirit self], especially those established on the path of self-realization, though freed from all kinds of material bondage, desire to render unalloyed devotional service unto the Personality of Godhead. This means that the Lord possesses transcendental qualities and therefore can attract everyone, including liberated souls.

Self realized souls who are not of this world are attracted to the devotional service of the Lord because there is such nectar. He has such a variety of pure relations, which the impersonalists do not accept; they say that nothing is superior to the bliss, the delight of Brahmān, as described in the Rāmāyaṇa.

In the personal pastimes of God there is so much nectar, which cannot be accessed by those who are situated in the impersonal feature of God. What is impersonal? That is Brahmān. Even a person, who is situated in the state of impersonal Brahmān, even his heart and mind can be attracted by the pastimes of Kṛṣṇa, and by studying these pastimes, renounces such sense objects readily available on Brahmā loka, planet of Lord Brahmā.

Once upon a time in Vaikuṇṭha, the fragrance of tulasī offered to the lotus feet of God, entered the noses of the four Kumāras. They were always absorbed in the bliss of Brahmān, but here in this instance, they forgot the enchantment of Brahmān.

When the breeze carrying the aroma of tulasī leaves from the toes of the lotus feet of the Personality of Godhead entered the nostrils of those sages, they experienced a change both in body and in mind, even though they were attached to the impersonal Brahman understanding.

The God is One who has lotus eyes, and tulasī offered to the His lotus feet. In this tulasī there is a paraga(small particles) and within is nectar rasa, makrand, and that makrand is different to the paraga. Kincid also means paraga, these small particles. From within these particles was an aroma, which was taken by the wind and entered the holes in the noses of the four Kumāras. There was an influence of the mode of goodness upon their hearts, tears came from their eyes, and their bodies became stunned and changed color. This transformation within in their bodies was definitely a manifestation of the mode of goodness.

Now when materialistic emotion comes, that is adultery. When a lustful man meets a woman, perspiration comes and even his words are disturbed, a change comes to his body. In the same way, because of devotion to God, the change that comes within the body is called the mode of goodness. Emotions belonging to devotion indicate the mode of goodness.

Upon the four Kumāras, who were always absorbed in the delight of Brahmān, an influence came upon their minds and bodies; showing how an awakened mind affects the body.

A person walking in the darkness and whose leg touches a rope, thinks that, “This is a snake,” and jumps out of fear, perspiration comes, his body trembles, and thinks that he has been bitten by black snake. So all these changes come upon the body and why do they arise? This is because of the emotions of mind. In the same way there are sexual desires. When lust comes in our mind, then changes manifest in the body and senses. Everybody knows this by experience. In the same way, by devotional service, when the mind is absorbed in devotion, that influence comes upon the body, the devotee weeps, and cries. Sometimes he dances and sometimes he doesn’t move. Why? The reason is because in devotion he realizes happiness, and with out such bliss, these things do not happen. With out suffering one can not cry and without happiness one can not laugh, the devotee cries and laughs; that means in his heart there is realization of grief and happiness. Whether that grief and happiness is in connection with God or the materialistic world; that is a different thing. If he is crying for any living entity that is materialistic grief, but if his shelter is God then that emotion is called mode of goodness. But if somebody cries for God, God dances for that person, then definitely his sins are destroyed and his mind is purified by contact with God. When God comes in the heart, how God comes is through emotions. When emotions come, then God Himself arrives. And entering the heart, God purifies the mind of the living entity. It is described in the Śrīmad Bhāgavat 2.8.4:

Persons who hear Śrīmad-Bhāgavatam regularly and are always taking the matter very seriously will have the Personality of Godhead Śrī Kṛṣṇa manifested in their hearts within a short time.

It is a very miraculous thing; if you have attained God then every day listen to his tales with faith. Every day listen to His tale and kirtan, his tale and kirtan are the same thing. Śukadevaji is accepted as the ācārya of kirtan. Kirtan does not mean that he is playing on the harmonium or kartals. Kirtan means to speak the glory of God; that is also kirtan. And one who speaks the pastimes of God, kālena nātidīrgheṇa bhagavān viśate hṛdi: then God comes into his heart Himself. If you make a call to your heart, then this is the vow, the promise of God, “I don’t live in Vaikuṇṭha, I don’t live in the hearts of yogis”:

“I do not live in Vaikuṇṭha, in the hearts of the yogīs, or inside the sun. Rather, My dear Nārada, I am present wherever My devotees sing about Me.” (Padma Purāṇa, Uttara-khaṇḍa 92.21–22)