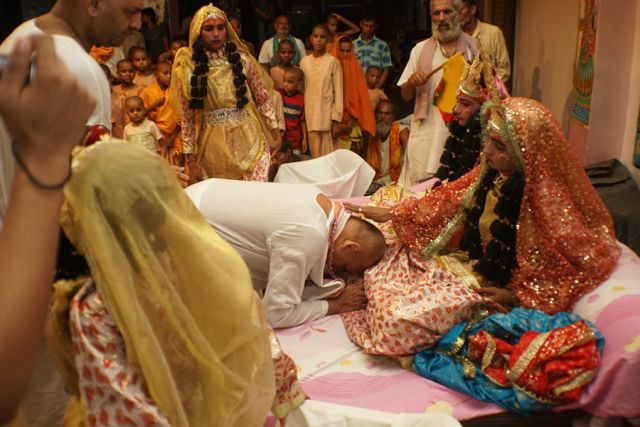 Tonight Maan Lila took place in the temple courtyard with 400 Brajabāsīs present. Śrī Ramesh Bābājī Mahārāj offered respects with a gift and received āshirwads(blessings) from Their Lorships; and dakṣiṇa was given to all the visiting kirtaneers.

Then the vibrant atmosphere sported lilas, dance, kirtan and finally into Maan Lila where Rādhārāṇī in love enhances the pastimes of the Lord through a temporary anger in relation.

In the west from baithakji (Śrī Vallabhācārya’s seat), Māngarh is situated on a peak. Śyāmasundar comes here to please Rādhārāṇī, Who in love, is in a resentful mood. This līlā has contributed to its name – Māngarh; ‘mān’ means resentment or annoyance. Śrī Kṛṣṇa has tried to please Her in many ways, by bowing down to Her feet, asking for pardon; making Her feel comfortable by fanning; showing Her a mirror; offering requests, but is unable to bring back a smile on Rādhārāṇī’s face. Finally, He takes help from the sakhīs. Actually, this bitterness is not for any worldly reason; this too is a loving pastime!

Rādhārāṇī performs this līlā for the pleasure of Śrī Kṛṣṇa. In this way, Śrī Mān Bihari Lalji is worshipped in Mān Mandir.

‘We offer obeisances to Śrī Mān Mandir which is most attractive with the complimentary presence of the devas and Gandharvas; at this most auspicious place Śrī Mānini (Rādhā ) became annoyed.’

Śrī Priyaji (Rādhā), seeing Her reflection in Śrī Kṛṣṇa’s bosom gets irritated. This has become the reason for Her displeasure, but the anger of our compassionate Rādhārāṇī is always momentary.

If this resentment remains, then it will get resolved in various ways at Māngarh.

1. Śrī Kṛṣṇa cajoles Her with His requests and service.

2. In the guise of vīṇā vādini (a female musician playing on a string instrument – vīṇā), He entertains Priyaji and then reveals His true identity.

At ‘vidagdha-mādhava in guise of nikuñja vidyā and at ‘saimari’ as Śyāmali sakhī and as ‘kinnari’ where He asks for ‘mān ratna’ instead of a ‘ratna mala’ as a gift!

4. With the help of other sakhīs – as Śrī Govinda Swami writes:

‘Śrīji got annoyed at the foothills; where Śyāmasundar tried to increasingly please Her, as She maneuvered up the hill. When Śrīji reached the top, then Śyāmasundar took help from the sakhīs. He requested Viśākhā and Lalitā to cajole Her after failing despite all His power. Śrī Rādhā refuses to accede to their request. They go back to Śyāmasundar who was waiting for them at the bottom of the hill, but sends them back for another try. This happened many times, but to no avail. Lastly, one sakhī became fatigued running up and down spoke to Rādhārāṇī thus, ‘O Rādhey! So many times I have climbed up and down this hill; now I am totally exhausted. You still don’t reunite! For how long can I run? You send me down and from there again I am sent back to you. Like a ball in the game of Chougan, Śyāmasundar and You are hitting me from one end to the other. (unlike Cricket, in the game of chougan, the ball is hit by many players). Please, go and meet Śyāmasundar now, the night is passing!’