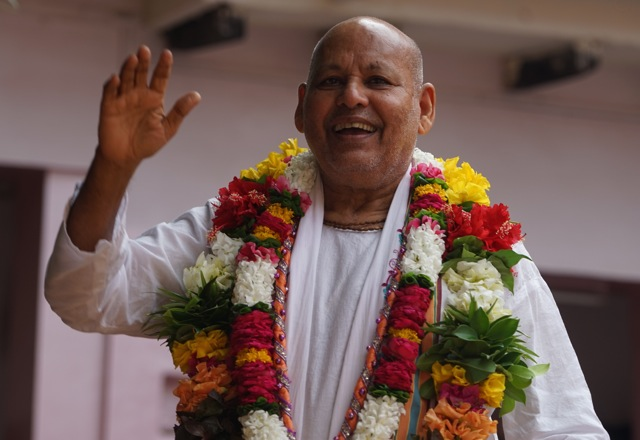 By the mercy of Śrīji, such service is being performed in Braja, which has never been done before.

For the past 5000 years, a tendency has manifested to keep Braja very narrow and limited. And narrow-mindedness has also come into every sampradāya. Nobody could avoid it. Therefore a very great destruction has occurred in Braja. We are the cause of this destruction, being filled with narrow-mindedness. Because of this, damage was done.

To fight against it, power is given by God. When our yatra first went to Kucharvati; all people opposed it: “You are going outside of Braja!”

Therefore until now discovery research could not be done. People would create fear. Slowly, slowly, courage came and the boarder yatra started.

By that, realization and research work also increased. We also gained practical proof, a foundation of faith by which all people could follow.

The destruction of Braja primarily occurred because it was near Delhi. Therefore Muslims invaded it repeatedly. Aurangzeb attacked Braja and during his time gave Mathura the name Mohammadabad and gave Vṛndāvana the name Islamabad, but this was not successful because the Dhama cannot be destroyed.

Secondly, the destruction of Braja took place because within the sampradāyas, narrow-mindedness increased. No one had the courage to fight against this narrow-mindedness. People feared the reaction. For instance, if the spiritual master would be angered, then it would be considered an offense to guru.

In this way, many circumstances arose. Often sādhus lack courage to fight against this narrow-mindedness fearing offenses to devotees and guru.

Māyā hangs with three ropes, the three modes of nature. Māyā speaks very sweetly, and binds, even in the form of a female disciple. Māyā binds the human being through sweet words and language. This is the courage of Kabhir das to speak in this way.

An ordinary person is fearful to speak such truths.

Viṣṇu is the basis of the mode of goodness, Brahmā the mode of passion, and Śiva the mode of ignorance. Everyone says this, but even after having said it, they lack the courage to confront the opposition.

In the temple also, maya is there in the form of the Deity: “What is this Deity in the temple, this is maya!” Kabir das has such courage to speak in this way.

Lord Kṛṣṇa also states this in the 10th Canto, speaking to an the assembly of Ṛṣis and great sages: Here Lord Kṛṣṇa compares the worshipers of deities to donkeys.

One who identifies his self as the inert body composed of mucus, bile and air, who assumes his wife and family are permanently his own, who thinks an earthen image or the land of his birth is worshipable, or who sees a place of pilgrimage as merely the water there, but who never identifies himself with, feels kinship with, worships or even visits those who are wise in spiritual truth—such a person is no better than a cow or an ass.

Throughout their entire life, the pūjārīs ring the bells in the temples, but their sight is on the plate to see how much money has been offered. One has served the temple deity all one’s life, but what result has been gained?

However, if one approaches real saints, just by their darshan one will be purified, a power that is not in the Deity. Again this is spoken by Lord Śrī Kṛṣṇa Himself in the assembly of great sages.

Neither the demigods controlling fire, the sun, the moon and the stars nor those in charge of earth, water, ether, air, speech and mind actually remove the sins of their worshipers, who continue to see in terms of dualities. But wise sages destroy one’s sins when respectfully served for even a few moments.

A discriminative mentality is sin. And by this sin each sampradāya and sādhu is bound. People lack the courage to measure the degree of this sin.

Why do people lack devotion to great saints? There are three reasons explained by Lord Kṛṣṇa in SB 10.84.13:

Firstly we are absorbed in the bodily platform and in gaining self-respect. Even if one gains release from this mentality, then the wife or son can also bind one. There are many people tried to get free in this way but their wife or son caused obstacles and they could not come and live in Braja.

There is the example of one who had begun constructing a dharmasala in Gokula. This happened 58 years ago. He thought he would live in Braja once he finished it. But his wife was not in his favor and he could not complete. He did not gain residence in Gokula and the dharmasala is useless now. Then he developed an attachment to residing in Gahavarvan, but he was not able to live here also.

Even his daughter made a room at Rāsa Mandira, but she also could not live here. So Śrī Kṛṣṇa states that as long as one maintains a sense of proprietorship over wife or son, one cannot gain the faith regarding devotees and saints.

Secondly, Murtis; deities of gold, silver, brass, iron. The earth makes all these. If one only has a mentality of worship and respect towards Them, then one cannot have the proper mood of respect towards saints. Giving up the association of the saint, one would wander seeking darshan of Kṛṣṇa in the temple, going here and there.

And simply a mood of respect and worship to Holy waters; ‘This is the Ganga, this Narmada, this is the Yamuna, this is Ganga sagara…’ One will not be able to understand the glory of saints.

If one has no attachment and love for the saints who know what devotion is; one is nothing but a duffer, a donkey and an ass. Even if one worships deities, takes bath in holy places of pilgrimage, or takes darshan of Kṛṣṇa
in the temple, if one does not develop attachment to the saints, one is the most foolish of animals, a donkey, an ass.

Therefore the glory of devotees is immeasurable. The association of devotees is the only way to obtain devotion. Otherwise it is impossible to attain.