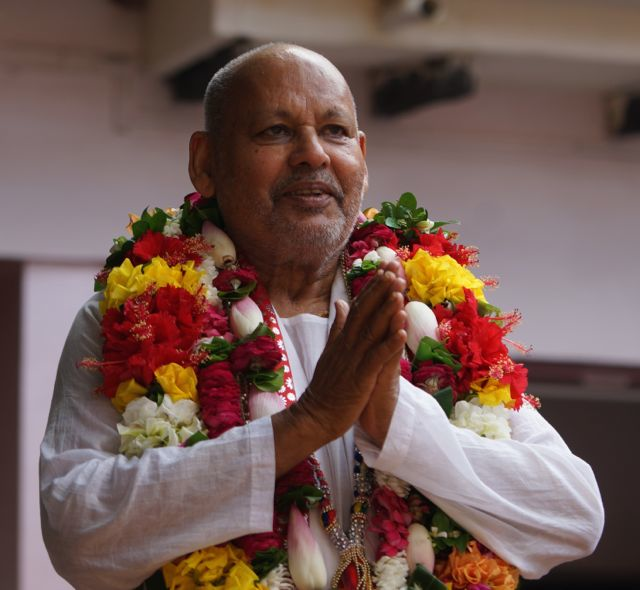 Without the mercy of great saints, devotion cannot be attained.

Lord Rāmacandra also says in Rāmacarita mānasa, “Only when great saints bestow their favor can one attain devotion, otherwise it is not possible.”

People disagree with Kabīr das’s statement that, “With Viṣṇu Lakṣmī is maya, within the temple, the deity is māyā and within holy places, water is māyā.” They say that this can only be the statement of an atheist. However this is not the opinion of an skeptic it is the Lord’s personal statement given in SB 10.84.13. There He states that people are simply donkeys if they worship the deity without worshiping the saints.

In regards to Kabīr das’s Hindi writings, they say one thing, but mean something else. For example, he states, “All the world is blind so whom can I instruct? Why is the world blind? Because they are engaged in filling their bellies.” In this case it does not literally mean filling their bellies where roṭis are digested, but the stomach of materialistic desires, which can never be filled or satiated.

The Personality of Godhead said: O my dear King, even the entirety of whatever there may be within the three worlds to satisfy one’s senses cannot satisfy a person whose senses are uncontrolled.

Bali had said to Lord Vāmanadeva, “You have begged three steps of
land, but that is not sufficient to sit nor sleep.”

Lord Vamandeva replied, “Within the three worlds all the most pleasing sense objects; tasty dishes, beautiful women, diamonds, jewels, gold, silver, jems cannot satisfy one who has not controlled his senses.”

Therefore Kabīr dasji states this, “All people are engaged in trying to fill their stomachs of materialistic desire. All the sense objects of the three worlds cannot satisfy one who has not controlled his senses. Even if the most beautiful woman in the three worlds were given to an uncontrolled man for sexual intercourse he would not be satisfied. Even if the most handsome man were given to an uncontrolled woman, she would not be satisfied, she would remain hungry.”

Why are we dying? We are not satisfied. We demand, “Bring more, bring more!”

In the two areas of wealth and sex enjoyment, to enjoy sense objects; there is no satisfaction.

Material existence causes discontent in regard to fulfilling one’s lusty desires and achieving more and more money. This is the cause for the continuation of material life, which is full of repeated birth and death. But one who is satisfied by that which is obtained by destiny is fit for liberation from this material existence.

Even within millions of births and deaths in this material world, his mind is never satisfied. He goes on walking, walking, and walking in this cycle of birth and death. There is no permanent place in this world. One cannot sit still; death is always approaching; so one is always walking.

When the Lord appeared in the sacrifice performed by Dakṣa, the members of the assembly addressed the Lord as follows:

The members of the assembly addressed the Lord: O exclusive shelter for all who are situated in troubled life, in this formidable fort of conditional existence the time element, like a snake, is always looking for an opportunity to strike. This world is full of ditches of so-called distress and happiness, and there are many ferocious animals always ready to attack. The fire of lamentation is always blazing, and the mirage of false happiness is always alluring, but one has no shelter from them. Thus foolish persons live in the cycle of birth and death, always overburdened in discharging their so-called duties, and we do not know when they will accept the shelter of Your lotus feet.

Right from when the living entity is born, activity begins. For a single moment one cannot sit. When there is birth, then the passage begins; he cries. The mother gives him milk then he laughs. Therefore it is such a passage of constant activity. The stomach is never satisfied.

How long can one sit upon a horse of water? Water is flowing, and the waves are coming. Air lifts the waves of flowing water. Kabīr das explains in this way about the ‘horse of water’.

Sense objects are like water in the sky, which quickly falls and vanishes. For example, while laddu and pera are in the mouth, there is some pleasure, but as soon as they are enter into the stomach, that taste gratification is over.

The flow of this water is very wide and deep. No one can cross over it. Who is the boatman? It is the intelligence. The intelligence is covered over by māyā.

So Kabīr dasji asks, “How can I instruct others and how can anyone else understand?”

If one says to a blind person, “Go to south direction, go east direction,” how will that be possible without being able to see?

Based on this Kabīr das says, “Why do you search for the Lord? He lives very close to you. He neither lives in the temple, nor in the
Mosque, in Kāśi, nor Kailash.

Nor is He in the chanting, the fasting and austerity. He doesn’t live in karma, yoga or in sannyāsā.”

You became a yogī and took sannyāsā. Did you attain the Lord? No!

“He doesn’t live in reclusive renounced life, nor in śaṅkya either.”

My dear sons of demons, the Supreme Personality of Godhead, Nārāyaṇa, is the original Supersoul, the father of all living entities. Consequently there are no impediments to pleasing Him or worshiping Him under any conditions, whether one be a child or an old man. The relationship between the living entities and the Supreme Personality of Godhead is always a fact, and therefore there is no difficulty in pleasing the Lord.

Prahlādaji said that although they were sons of demons, in searching for the Lord there is no hard work. Who is the Lord? He is your soul. He is everywhere. Where do you need to go to search for Him?

Prahladaji uses the word soul meaning the Lord Who is all pervading and Who shows His mercy to all.

Only the mother shows mercy. God is the all-pervading Mother. He
doesn’t need to be searched for. She is inside your heart.

O my friends, sons of the asuras, the Supreme Personality of Godhead in His Supersoul feature always exists within the cores of the hearts of all living entities. Indeed, He is the well-wisher and friend of all living entities, and there is no difficulty in worshiping the Lord. Why, then, should people not engage in His devotional service?

Why are they so addicted to unnecessarily producing artificial paraphernalia for sense gratification?

If there is water inside the jug, and one throws it away then there will be air left. If one takes the air out of the jug, ether, sky will be left in it. In the same way, the Lord will be attained when one takes out all material desires from the heart.

If a sādhu has a desire for eating tasty dishes, he cannot attain the Lord.

Lord Rāma said to Vibhīṣaṇa in the Rāmacarita mānasa sundara-kāṇḍa, doha 48, “Just as a greedy person dies without being able to spend even two rupees, in the same way, even if I die, I will not be able to leave such a devotee.”

O best of the brāhmaṇas, without saintly persons for whom I am the only destination, I do not desire to enjoy My transcendental bliss and My supreme opulences.

The Lord stated that He cannot live without such devotees. As a greedy person dies but can’t give up his money, the Lord cannot give up His devotees in any circumstances.

Even after taking to the life of a sādhu, we need money and deposit it in the bank. And we collect money. Can we attain the Lord in this way? Never.

We remember the words given in pravachan but still our activities are the opposite.

In different sampradāyas sādhus are lecturing to give up money and saying, “But give it to me.”

We can say it in a lecture, but real renunciation is difficult. It is easy to die, but to give up our attachment to money is difficult.