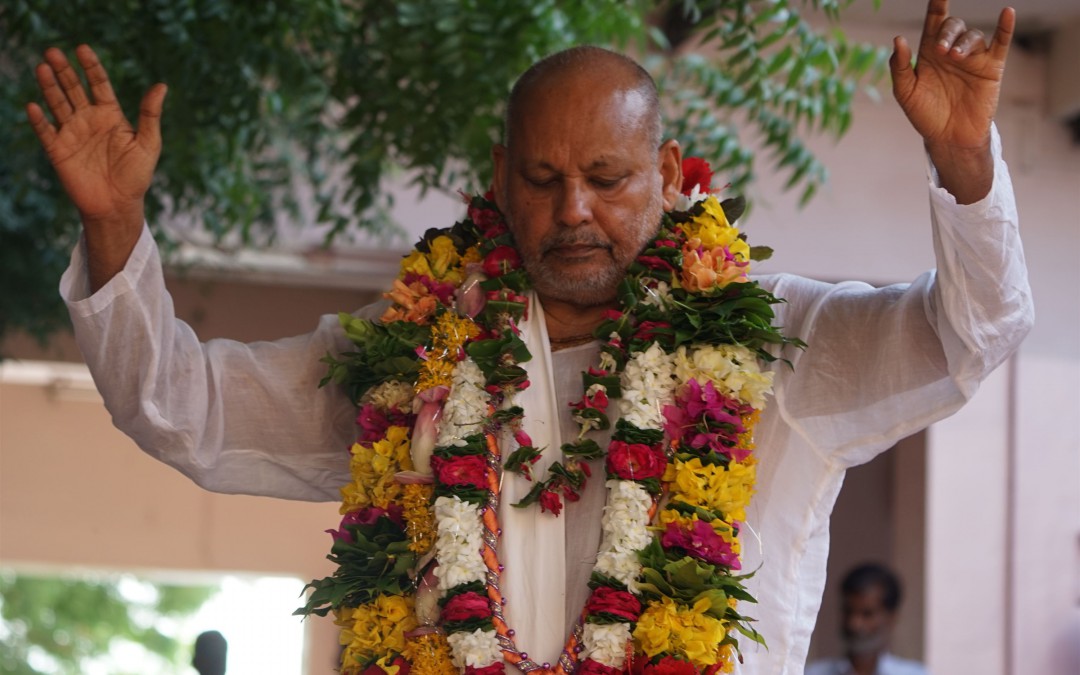 O supreme unconquerable Lord, when they become absorbed in thoughts of material enjoyment, Lord Brahmā and Lord Śiva, as well as other demigods and demons, undergo severe penances and austerities to receive my benedictions. But I do not favor anyone, however great he may be; unless he is always engaged in the service of Your lotus feet. Because I always keep You within my heart, I cannot favor anyone but a devotee.

Yesterday there was no time to explain what is Lakṣmī. Today I will try.

Lakṣmīji says: “To achieve my favor, Brahmā, Śaṅkara, demigods and demons like Rāvaṇa and Hiraṇyakaśipu perform great austerities. But they cannot attain me. Only a devotee who is under Your shelter can attain me. This is because I am a Sati (chaste) woman.”

A chaste woman can never associate someone who is contrary to her husband.

However, there have been scandals is nearby villages where the husband of a woman was killed by a man who the woman loved. This goes on in the materialistic realm.

Lakṣmī says, “I only approach that devotee in whose heart you live.
Only the devotee is your conqueror.”

After reading this śloka, a thought came in my mind: Rāvaṇa had so much money. Rāvaṇa arrested even Kuvera, the demigod in charge of wealth. Rāvaṇa and Hiraṇyakaśipu were so wealthy. At the present time also, there are so many millionaires, billionaires and trillionaires. However they are fully materialistic. Day and night they are accumulating money. They have nothing to do with the Lord.

For them if the Lord is not attained it is good.

Commentators on the Bhāgavatam say that Dhruva, Ambarish and Prahlada attained such transcendental Lakṣmī. In connection with Ambarish it is described in the 9th Canto:

Śukadeva Gosvāmī said: Mahārāja Ambarīṣa, the most fortunate personality, achieved the rule of the entire world, consisting of seven islands, and achieved inexhaustible, unlimited opulence and prosperity on earth. Although such a position is rarely obtained, Mahārāja Ambarīṣa did not care for it at all, for he knew very well that all such opulence is material. Like that which is imagined in a dream, such opulence will ultimately be destroyed. The King knew that any nondevotee who attains such opulence merges increasingly into material nature’s mode of darkness.

Giving more details, the commentators state that in the Lord’s Lakṣmī there is never any suffering nor degradation. In the Bhaktamal commentary it is written that there are four sons of Lakṣmī: The King of religion, the King of irreligion, fire and thieves.

Lakṣmī having these four sons means that there are four passages for Lakṣmī to be spent. The first passage is religion, which is the oldest son of Lakṣmī. The eldest son should attain the throne. If Lakṣmī is not spent in this way then Lakṣmī will go to the remaining 3 places.

Fire means there will quarrel. Money will be spent in quarrel. Or the King will take tax, or thieves will steal the money.

What is the reason that only businessmen have so much money? Everywhere people are running by the money of businessmen. Businessmen are very clever.

In Allahabad each shopkeeper spends part of his income to support religious activities. In the temple there are many theists and yet the money belongs to businessmen. Other castes don’t know this technique; to donate a percentage of their income to religious enterprises. Therefore the money of these businessmen is passed down through the generations whereas the money of other people ends very soon.

In the same way first the money went to Dhruva and Prahlada. And also so much wealth went towards Ambarish that it could never be spent. It was immortal. Śukadeva stated that there was no comparison to the opulence of Ambarish. However that money was not spent in sense gratification. He did not spend that money for his own purposes. He only engaged money in the service of the Lord. And it was helpful in attaining the Lord.

Kardama Muni continued: What is the use of enjoyments other than the Lord’s grace? All material achievements are subject to be annihilated simply by a movement of the eyebrows of Lord Viṣṇu the Supreme Personality of Godhead. By your principles of, devotion to your husband, you have achieved and can enjoy transcendental gifts very rarely obtained by persons proud of aristocracy and material possessions.

King Akhbar said to Kumbhandas, take so much money property. But he did not take, he said never call me again and never come to my house.

At the present time everywhere you can see that the rich persons in India are mostly sick, or in their homes there is so much suffering or quarrel. I am saying this because many rich persons have come here.

He replied, “How can I be happy? My middle son wastes all the money and I cannot say anything to him.”

“If I say all my business would be lost. I have two good sons,
but my middle son is wasting the money.”

For one night of consuming urine, twenty lac rupees will be spent. They take an airplane from here and when they arrive in Switzerland they stay in a 5 star hotel. So many lakhs of rupees are spent in one night.

The father continued, “But I cannot say anything.”

Such is the condition of so many rich persons in India; such was his condition. This is because it is materialistic sense gratification.

In materialistic money there are fifteen faults. There is disease, attachment, so many faults. At every moment the person’s mind is bound with thoughts of how to protect his money from income tax etc. There are so many concerns and quarrels over money.

Transcendental sense objects are only attained by the mercy of the Lord. I will give an example. Sometimes people consider my own appreciation. The spender of my Maan Biharilal is also not less, because 7 to 8 lacs rupees is engaged in the service to cows.

Billions of rupees are spent on Braja Yatra. Up to now no sadhu or any girl has any concern where from money will come from; how Yatra will run, how the gośala will run.

You can ask the residents who live here whether they are concerned. Never do they have such concern. All the work is going on regardless. Each person is engaged in his bhajan. It is not that they are running for donation.

In the world there are so many rich persons who come here and say, “My girls are divorced, what to do?”

Silently I listen because this is the fault of money. This is because of contaminated money. When a contaminated thing comes, you are degraded. However common human beings cannot understand this principle.

People think that even if the head is cut, money should come. The greatest thing for them is money.

I will also share another small example. The grandmother of Murali, Yamuna at Rāsa Mandir. From the beginning so many guests would come and they used to eat food at Rāsa Mandira But she never took anything from any guest and neither there was tendency to take. Then in the house love and property increased.

I have great wonder. Some days ago I was talking to Pandita Ramajilal Sharma. He said at our place also marriage has to take place, but I don’t want to take impious money, but what to do, my younger brother is greedy. He thinks the money should come from anywhere. To donate a daughter is a sacrifice when outward money comes it is impure. The result will be divorce, disease or other sufferings.

One maya is that which is attained by the mercy of the Lord. That money always increases. And it takes one toward the Lord.

By the mercy of Rādhārāṇī at our Maan garh, when the gośala was opened, almost six years ago, there were only two or three cows. At the present time there are twenty five thousand cows. Every day cows are increasing. If there is not enough space, then more land is purchased for millions of rupees. What is this? This is the transcendence of maya. Property is increasing, but greed is not increasing.